The Vice President for International Business Development at Lockheed Martin, Ana M. Wugofski, spoke to us about the life-extension of the Fighting Falcon, and women in the defence sector

Defence IQ: Ana, across various acquisition campaigns, your competitors have tried to paint the F-16 as something that needs to be replaced.

However, the F-16 is still seeing interest from the international market. From the view of the Fighting Falcon’s original equipment manufacturer (OEM), where does the 1970s fighter stand today?

Wugofski: It stands good and strong. If I’m right, as of 2018, 4,588 F-16s have been put into service since 1978. They’ve been built in the USA and in Belgium, Holland, South Korea and Turkey. The great export success of the Falcon – to NATO nations and beyond – has meant that the type is still used by 25 air forces today.

Back in 2017, more than 3,000 F-16s were still in service, which is about 16 per cent of all fighter fleets operating worldwide. This makes them the most widely used fighter. And there are orders, such as from Bahrain, and now Taiwan and modernisation requests among some existing users.

Austria has recently inquired with the US government about the status and costs of possible alternatives [to the Eurofighter T1]. So, the F-16 is by no means dead, even if it's sometimes painted like that!

Wugofski: The 'V' or ‘Viper’ was unveiled at the 2012 Singapore Airshow. It is a further improved version, with new Raytheon mission computer and advanced system capabilities. It is possible to either upgrade existing machines to the new ‘V’-standard or to build completely new F-16s like the ones for Bahrain. 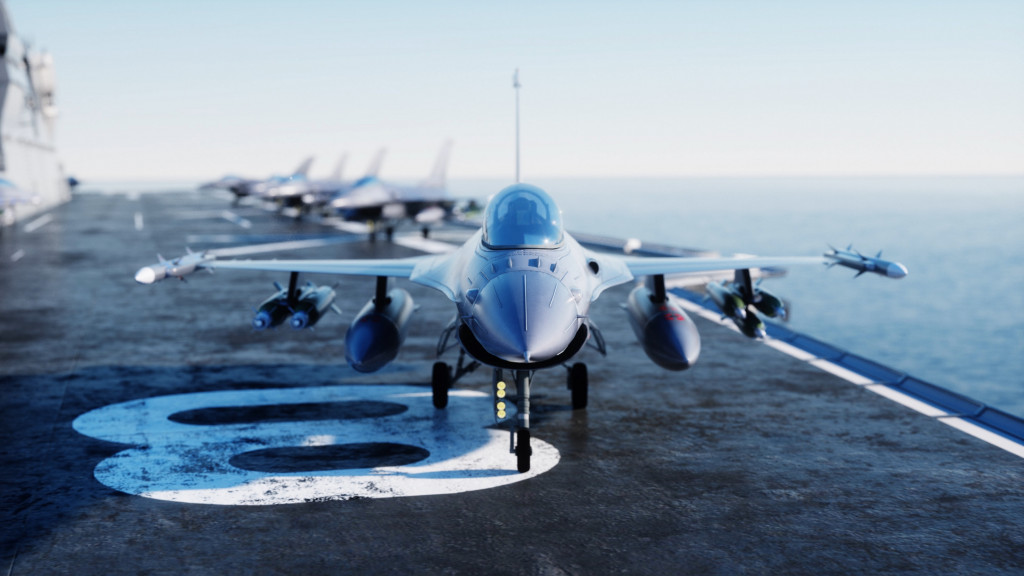 For Bahrain, it was a 'win win' situation. We are just starting to build these aircraft there. Additionally, Bahrain has asked for [US] Congress approval, to upgrade their existing inventory of [20] F-16 Block-40 to the same configuration. The Block 70/72 – the difference is always the engine selection – is subsequently the new-production version of the V-upgrade kit that we deliver for existing customers.

"We have three foreign customers at the moment, with 300 aircraft under work or contracted in the roadmap to be upgraded to the V-configuration"

Defence IQ: Do those include the 144 Taiwanese and the upcoming 85 Greek ones?

Wugofski:  Those are among them. For Taiwan, the local AIDC (Aerospace Industrial Development Corporation) is responsible for carrying out the retrofitting programme there, with the first four F-16Vs upgraded late last year. Taiwan is to be the first nation worldwide to have a fleet of F-16Vs [Taiwan has asked to buy up to 66 F-16 fighter jets on 07 March 2019 – Editor].

For Greece, the US has approved the possible sale of more than 120 upgrade kits from us for their complete F-16 fleet out of four variants. Since then, Washington accepted a revised Greek proposal that takes into consideration the country's fiscal obligations in the coming years. So the numbers of kits were reduced, earmarked likely for their later C/D models. But this now has to be approved by the Greek parliament [Approval was received on 28 April – Editor].

RECOMMENDED: IFS A&D: How defence is being redefined with new technologies [Interview]

You have to remember that since we delivered the last one to USAF in the early 2000s, the F-16 has remained an international programme among our large base of customers. All the procurement was international. So we are confident that this will increase the capability of these nations. If they ever want to have new F-16s, this is aligned to their V-configuration from the kits they have acquired. They will benefit from this commonality.

Defence IQ: Can you tell us a little bit more about commonality?

Wugofski: For example. That’s what we call a ‘sweet spot’, especially for NATO nations that want no obstacles towards interoperability with existing platforms. But no matter who or how many, by far the most important upgrade of all will be the replacement of the existing jets’ mechanically scanned radars with an active electronically scanned array [AESA] radar. Truly F-35-type technology.

Defence IQ: What radar is that, the one from JSF?

Wugofski: A derivative of it. In the F-35 there is the AN/APG-81 and here we talk about the AN/APG-83 AESA type radar with 85 per cent commonality on the F-35 system, also known as the ‘Scalable Agile Beam Radar’ (SABR). It has faster scanning and even interlaced air and ground modes. It’s able to more accurately detect targets at longer ranges and smaller aerial targets flying at low altitude.

One would call it radar, but in fact, it’s a multifunction array. It’s a cost-effective way to get more capability out of the older F-16Cs all by itself. The US itself has recognised this and, in June 2017, Northrop Grumman announced it had gotten a contract to upgrade 72 Air National Guard F-16Cs with that new set.

DIB: Where will future F-16s be built?

Wugofski: The production line has now moved to Greenville, South Carolina. There, brand new ones will be built as well as upgrade work will be carried out.

Defence IQ: What’s available at Greenville – and what was there before?

Wugofksi:  This is a site our company has run since 1984. We have provided modification, maintenance, repair, and overhaul services for both military and civil aircraft from this facility at the so-called S.C. Technology and Aviation Center in southern Greenville County.

And now we are gearing up local operations there, with a 110,000 square-foot hangar to house the F-16 activities. We’re hiring some 160 people there to begin production on one aircraft a month. Our goal is actually to support the production of two aircraft a month, should there be contracts with other countries.

The place is also a potential location for the assembly of the T-50A trainer, which we’re proposing with KAI for 350 aircraft for the USAF’s T-X programme. Then it’s the location for the C-5M Galaxy‘s avionics-modernization programme, expected to conclude this year. In total, 52 aircraft kits were produced from Greenville and sent to Dover AFB and Travis AFB, where LM Field Team Operations employees completed the installation.

Defence IQ: Is the Block-70 now an evolution of the Emirates’ Block-60?

Regarding Block-60, this was specifically for this customer VAE, with a liquid-cooled AESA radar and the GE-132 engine. While the latter is now optional for the Block-70 as well, this model can now also refuel from both the tank boom and the hose/drogue system. In addition, there is an enhanced display suite with the 'Center Pedestal Display' added – essentially a HD TV. It’s all based on a significantly faster mission computer, connected to the aircraft via Ethernet. So, no more MIL-STD 1553 data buses and much more data can circulate.

Defence IQ: Is there news regarding the remaining F-16s operated by the USAF – of which several hundred are still in service?

Wugofski: They may be service longer than the two of us will be alive! It is expected that they’ll overhaul more than 800 of their Block 40/42 and Block 50/52 F-16C/Ds and keep them flying – alongside the F-35 – through to 2048. During this time, they will need their own additional radar and system upgrades, suggesting that there will be a steady support pipeline for any country flying Vipers in parallel for years to come.

Defence IQ: How is Lockheed Martin involved as the OEM if there are bilateral transfers, such as Israel passing F-16s to Croatia, or Portugal to Romania? What’s your role in those types of scenarios?

Wugofski: It really depends on the individual case. As you said, during the history of the F-16, transfers between countries have been made a number of times. The Dutch ones went to Chile. Early models went from Jordan to Pakistan. But you’re right, typically there is a role for us. Often such agreements have a ‘US part’ embedded as these are US-built articles. That’s when things fall on us. 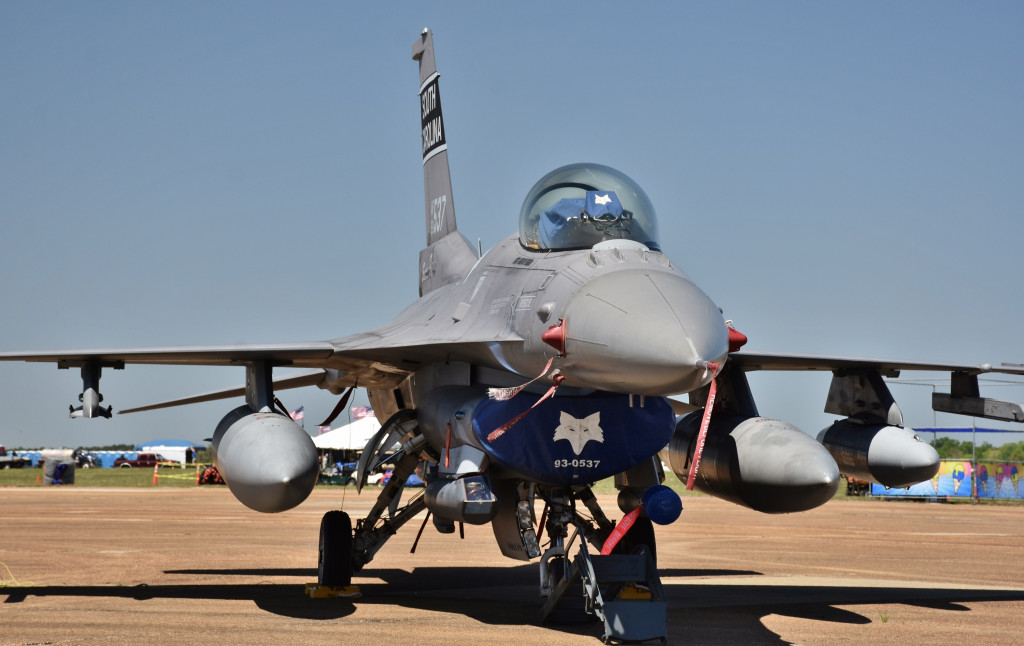 Defence IQ:  Armaments were always limited compared to the 12 missiles on a Flanker, for example, or what a Typhoon or Rafále can carry. What are your thoughts on that?

Wugofski: Ordnance was limited, yes, but in an incomparable variety. That's why there are now ten, instead of six, air-to-air missiles on triple-starters. Maybe not that important for some regions.

Defence IQ: In summary, you’re predicting a bright future ahead for the Falcon, despite it turning 40 years old?

Wugofski: Yes, because the F-16 – while globally recognised as a combat-proven platform with many air-to-air kills and used in hundreds or thousands of ground-strikes – simply continues to remain a very affordable alternative to a variety of types out there. If you look at it from an industrial point of view, its track record provides really high availability of parts, so there’s sustainability for decades to come. It’s economy of scale.

Women in the defence sector

Defence IQ: A personal question to conclude, please. I listened to your CEO Marillyn Hewson speak in Dubai. Is it different for a woman in the business of selling fighter aircraft? In Europe, in our parliaments, most women in positions would rather work to convince us that the world doesn’t need such ‘deadly machines."

Wugofski: And I would maybe join them if this world was an ideal place. But it isn’t. Other than that, I don’t think it’s that different [as a woman] with customers in the end.

Bear in mind that this business is about facilitating a security relationship with the US, comingled with the US government’s seal of approval and tied together by the reputation of a brand that is time-tested and superior. Therefore, the term ‘quick sale’ is not in my vocabulary. It takes quite a lot of time sitting down with customers and truly understanding their needs. It’s rare that after a first encounter a customer will buy within months. Rather, I and my local teams have sometimes spent years nurturing the relationships that grow our international business.

RECOMMENDED: Belgium and the F-35: How will the purchase affect NATO and European strategy?

That is essential. Cultivated relations with built-up trust are the real key. While it’s important for customers to understand our product, we need to understand their circumstances, needs, and concerns. In the US we enjoy a high level of infrastructure, training and knowledge for our products. But some countries don’t have such resources. So we need to adapt our products to make sure we deliver the required capability. All these factors can affect our business since it moves between ‘simple’ funding issues and sometimes complicated diplomatic relations – whether you’re a woman, or not!