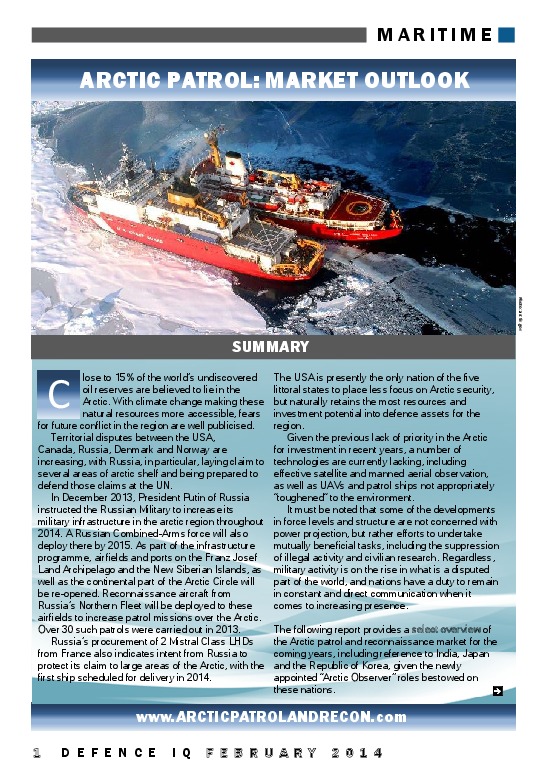 Close to 15% of the world’s undiscovered oil reserves are believed to lie in the Arctic. With climate change making these natural resources more accessible, fears for future conflict in the region are well publicised. Territorial disputes between the USA, Canada, Russia, Denmark and Norway are increasing, with Russia, in particular, laying claim to several areas of arctic shelf and being prepared to defend those claims at the UN.

In December 2013, President Putin of Russia instructed the Russian Military to increase its military infrastructure in the arctic region throughout 2014. A Russian Combined-Arms force will also deploy there by 2015. As part of the infrastructure programme, airfields and ports on the Franz Josef Land Archipelago and the New Siberian Islands, as well as the continental part of the Arctic Circle will be re-opened. Reconnaissance aircraft from Russia’s Northern Fleet will be deployed to these airfields to increase patrol missions over the Arctic. Over 30 such patrols were carried out in 2013.

Russia’s procurement of 2 Mistral Class LHDs from France also indicates intent from Russia to protect its claim to large areas of the Arctic, with the first ship scheduled for delivery in 2014.

The USA is presently the only nation of the five littoral states to place less focus on Arctic security, but naturally retains the most resources and investment potential into defence assets for the region.

Given the previous lack of priority in the Arctic for investment in recent years, a number of technologies are currently lacking, including effective satellite and manned aerial observation, as well as UAVs and patrol ships not appropriately "toughened" to the environment.

It must be noted that some of the developments in force levels and structure are not concerned with power projection, but rather efforts to undertake mutually beneficial tasks, including the suppression of illegal activity and civilian research. Regardless, military activity is on the rise in what is a disputed part of the world, and nations have a duty to remain in constant and direct communication when it comes to increasing presence.

The following report provides a select overview of the Arctic patrol and reconnaissance market for the coming years, including reference to India, Japan and the Republic of Korea, given the newly appointed "Arctic Observer" roles bestowed on these nations.