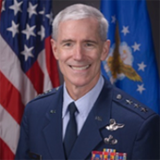 Check out the incredible speaker line-up to see who will be joining Robert P ‘Bob’.

16:10 THE GREATEST CHALLENGE? SHAPING ACQUISITION CULTURE TO SUPPORT PARTNERSHIP AND ACCELERATE THE APPLICATION OF EMERGING TECHNOLOGY