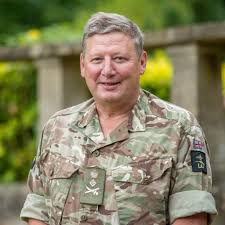 General Sir Chris Deverell was commissioned into the Second Royal Tank Regiment in 1979. After graduating from Oxford University with a degree in politics, philosophy and economics, he saw regimental service in Northern Ireland, Germany, Belize and Cyprus. He commanded the Joint Nuclear Biological and Chemical Regiment (First Royal Tank Regiment) at RAF Honington in Suffolk, and 4th Armoured Brigade in Iraq and Germany.

General Deverell has served 4 appointments in the Head Office of the Ministry of Defence: in Land Systems Operational Requirements, in Army Plans, as Assistant Private Secretary to the Secretary of State for Defence, and as Director of Equipment Capability (Ground Manoeuvre). His operational appointments include Deputy Assistant Chief of Staff for Land Operations in the Permanent Joint Headquarters, Chief of Staff to the Senior British Military Advisor at US Central Command during the build-up to and invasion of Iraq, and Deputy Assistant Chief of Staff (Operations/Commitments) in Headquarters Land Forces.

On promotion to Major General in December 2008, he became Director General Logistics Support and Equipment in Headquarters Land Forces, before moving to Defence Equipment and Support in March 2011 as Director Materiel Strategy. In July 2012 he was appointed Chief of Materiel (Land) and Quartermaster General. Upon promotion to General in April 2016 he assumed Command of Joint Forces Command.

Check out the incredible speaker line-up to see who will be joining Chris.