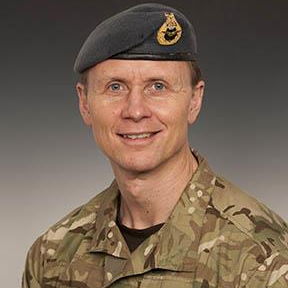 As Director Joint Warfare Bruce Hedley is responsible for the development, exercising and evaluation of the Joint Force to assure against the current and future threats.

He joined the RAF in 1985 and began his operational career flying the Harrier GR3 with IV (Army Cooperation) Squadron at RAF Gütersloh, Germany. He qualified as a Weapons Instructor flying the Harrier GR5 and was posted to 3(Fighter) Squadron in RAF Laarbruch. He displayed the Harrier GR7A for 2 years from 1993 before posting to Marine Corps Air Station Yuma, USA where he flew the AV8B with VMA 214. Having conducted 5 frontline tours on the Harrier, punctuated with 2 years in Fast Jet Junior Officer Manning, he amassed over 3000 fast jet flying hours.

Operationally, he has supported WARDEN over Northern Iraq, DELIBERATE FORCE over Bosnia, BOLTON and SOUTHERN WATCH over Southern Iraq and TELIC where he was responsible for reconnaissance missions. As Officer Commanding 3(Fighter) Squadron, he led the deployment of GR7A operations to Kandahar, Afghanistan for Operation HERRICK, and returned on several occasions. Then as a Group Captain was the Force Effects Co-ordinator and Director of Communication with II Marine Expeditionary Force (Forward) to Camp Leatherneck, Afghanistan.

Under Joint Force Harrier he trained Royal Navy personnel to allow the inauguration of 800 NAS with extensive deployment on HMS Illustrious. He went on to hold the position of Joint Targeting Effects within Joint Capability MoD, before promotion to Group Captain and transfer to the post of Deputy Principal Staff Officer to the Chief of the Defence Staff. He took Command of RAF Valley in 2009 and introduced Hawk T Mk 2 into fast jet training to help deliver the new Military Flying Training System. On promotion he assumed Command of Air Warfare Centre as Commandant and Director of the Joint Electronic Warfare Operational Support Centre. He restructured Air Test and Evaluation, led RAF Intelligence, formed an Information Warfare Division and delivered the RAF Strategy for Cyber, whilst supporting the Warfighter on operations. Following HCSC he was appointed as Director Joint Warfare in May 2016.

Bruce Hedley is Chairman of RAF Bobsleigh, Luge and Skeleton, President of RAF Badminton and is himself a keen sportsman. At home he helps run a family business with his wife Stella and has 2 sons.

Check out the incredible speaker line-up to see who will be joining Bruce H..