Virtual reality for defence less about ‘reality’ than results 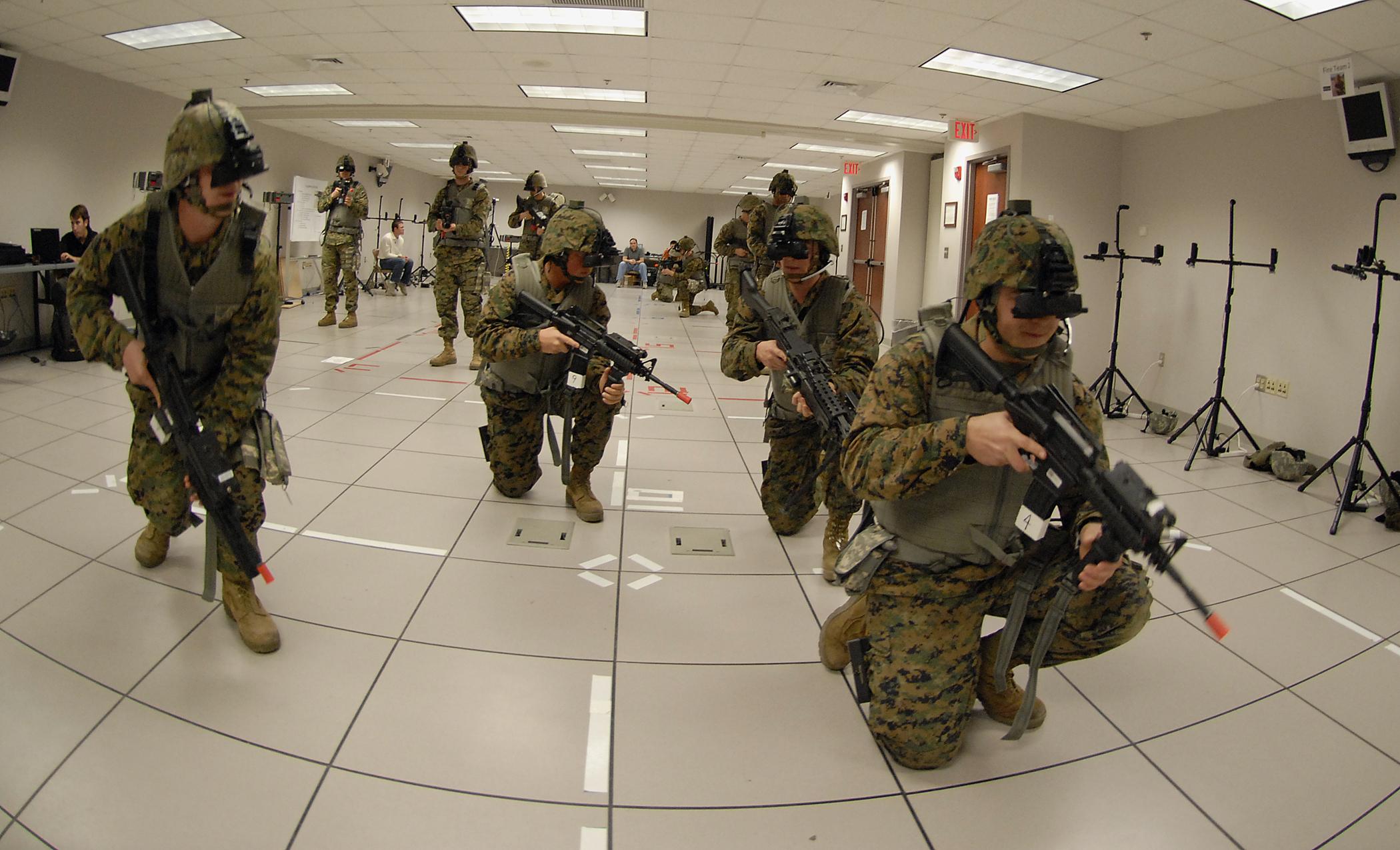 As the old story goes, when the Lumière brothers first screened their short film ‘The Arrival of a Train at La Ciotat Station’ for the general public in 1896, the audience was so overwhelmed by the sight of a steam train moving towards the lens that they screamed and dived for the exits.

While this quaint anecdote has since been dismissed as an urban legend, the evolution of motion picture into immersive, virtual reality (VR) and 3D imagery has undoubtedly had a genuine physical impact on viewers.

From audiences ducking to ‘avoid’ moving objects on the screen to gamers suffering motion sickness when using the latest headsets, the gap between reality and simulation is slowly disappearing.

The defence world has identified the benefits of this. The market is teeming with solutions that exploit VR for military operations, primarily in order to benefit training and manufacturing.

However, the need for realism has different connotations for the defence customer than for the average consumer. Experts say high-end graphics are in less demand than true operational outcome. But despite this key difference, the defence world is relying heavily on the entertainment industry to advance its leading solutions.

From PlayStations to battle stations

“Because we use commercial gaming technology, we can exploit the investments that industry has made,” says Simon Luck, head of systems and information assurance at BMT Defence Services (BMT).

“The entertainment industry is about a hundred billion dollars a year. We simply don’t have those sorts of budgets in defence. So we’re effectively using gaming developers and 3D artists – skillsets that we don’t traditionally own in defence – bringing them into our organisation and adopting the culture they’re used to in order to allow them to grow creative solutions.”

BMT started to develop its Engage VR platform about four years ago when consumer technology like the Oculus Rift woke the defence industry up to serious VR opportunities. Using commercial gaming technology, Engage has been used to immerse users into an environment of explosive ordnance disposal in order to familiarise them with the right controls and procedures for that environment. 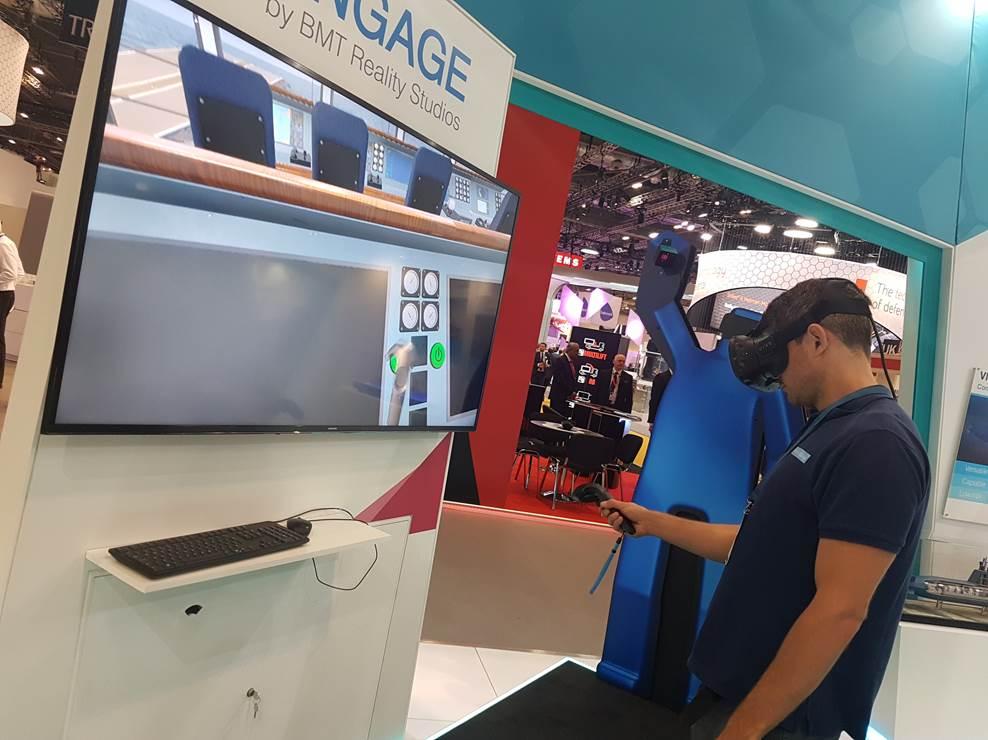 The company’s latest effort is the QEC Walkthrough, a virtual guide to the Royal Navy’s brand new Queen Elizabeth aircraft carrier. With 3,000 compartments, this gigantic platform requires those stationed inside it to have a deep, working knowledge of how to navigate their way around. As users can form a working knowledge of the quickest escape routes and emergency operating procedures that would be costly to attempt to perform on the real vessel, the program is touted as a major benefit to mariner safety.

These programs extend their usefulness by simultaneously capturing data on the individual – from how they meet the objectives to how efficient their performance has been – allowing instructors to determine whether they need to adapt the difficulty levels or monitor how different users take different routes to completing a task.

“The entertainment industry is about a hundred billion dollars a year. We simply don’t have those sorts of budgets in defence"

“Within BMT, we always talk about that human sense of design,” Luck says.

“The most important part of the design is determining what the training objectives are, what the users’ roles are, and what the outcomes need to be. We develop simulation around that.”

This is a sentiment echoed by developers at QinetiQ, who have launched the Collective Innovative Training Environment – or xCITE – a concept that can be tailored to a range of requirements whenever junior staff require immediate familiarity with a platform.

“The way the youth of today learns is significantly different to how my generation learnt. It’s much more touch- and feel-based – much more interactive. Children these days have iPads at five years old, they’re on mobile phones by ten, and they’re doing everything by moving a screen. Traditional classroom – or Powerpoint – has had its day.”

Defence IQ was shown a live VR program based on a fictional (but realistic) submarine, with young people donning headsets to develop their knowledge and responsiveness on virtual control panels. Results of the system have apparently been positive, with previously cynical senior officers becoming proponents after seeing the accuracy of the system first-hand.

Serious gaming on the move

The point of gamification is that the learning outcomes remain but the process is designed to be fun. As has been discovered in trials, trainees may not even know there are targets involved but will still find a way to achieve them. If they are amongst friends, they will be competitive. And key to the concept, users can take programs out of the classroom, install them on their own device and practise anywhere.

That versatility should not be underestimated. QinetiQ’s solution is the first time that VR has been distributed in a collective training environment. Since the Afghanistan campaign, the organisation has built its pedigree in the military training world over the past decade by bringing together disparate sets of trainees and joining them together in a single, synthetic battlespace.

However, QinetiQ sees its real speciality as its ability to undertake training needs analysis, determining the customer’s requirements and build a solution that fits at the lowest cost – concept known as ‘targeted fidelity’. That approach discards the idea of simply providing the most advanced and complex system to all, preferring instead to reduce time and costs wherever possible.

The organisation is therefore not currently looking to upscale xCite’s graphics to ultra-realistic settings as such advances will not necessarily provide tangible benefit. In fact, to attempt to over-advance the systems could have a degenerative impact on the training results, given that the distributed nature of the system requires the software to run on standard devices, such as an android smartphone installed in a Google Cardboard kit.

“Even with very little source material and generic information, you can make a very compelling immersive experience” says Dryburgh.

“The laws of physics dictate that there’s always a time delay [lag] between the activity of one user appearing to and taking effect on another. The more users, the higher the need for processing power and the higher the risk of delay. Our goal is to minimise that delay as these systems expand so they don’t interfere with the realism.

“So the end product doesn’t have to be identical to the real world. Much of it comes back to the experience and engagement of the provider. If we understand the customer and can deliver enough that they meet their goals, when it comes down to it, that’s all that matters.”

While technology is secondary to technique, there are still many high-tech features that defence VR developers are looking forward to add. As usual, the plan is to exploit all of the gaming technology that emerges in the years ahead, so the more the public buys into VR, the more sophisticated training will become for soldiers.

“The HTC Vive headset we have now will soon be wireless and we’re also going to move more into augmented reality (AR), which is perhaps one or two years behind VR,” Luck reveals.

“At BMT, we’re building on the HoloLens system we use for cyber mission planning – allowing users to pull up virtual maps and scroll through networks and elements to better understand how to protect both the physical and cyber infrastructure. It’s in its early stages but we’re now undertaking a research project for DSTL and a lot of investment is going in.”

“Effectively, you have a full, virtual test-bed platform developing in synch with a real world platform. The cost benefits in a virtual approach are astounding”

Beyond training, BMT is also working on its ‘Digital Twin’ concept – a virtual representation of a defence platform throughout its service life to assist in construction, maintenance and upgrades.

As an example, when a new warship is going into its concept design, developers will soon be able to use its Digital Twin to experiment with spatial acceptance, design limitations and repair demands. Even at the disposal stage at the end of the ship’s life, the Twin will allow personnel to “walk around” the platform to determine where hazardous material may lie or how best to salvage its parts.

“Effectively, you have a full, virtual test-bed platform developing in synch with a real world platform. The cost benefits in a virtual approach are astounding,” Luck adds.

Meanwhile, QinetiQ is also embracing the incremental developments of consumer technology – including the recent elimination of ‘simulation sickness’ – as a means of expanding the overall scale of its offering.

“We’re still looking at how we can really exploit distributed VR to its maximum potential,” Dryburgh says.

“But we could soon see it deployed on ships at sea because the footprint of a laptop or mobile device is relatively small. Needless to say, we certainly have some exciting plans in the works.”

Interested in virtual reality solutions for defence? Sign up for a free membership to Defence IQ today for more analysis, reports, insight and commercial opportunities in the defence industry.