Our recent publication on innovation in defence used the Royal Navy as a case study. Here, we present some analysis of the British Army’s approach to innovation and capability development for future multi-domain operations.

At this year’s DSEI, Chief of the General Staff General Sir Mark Carleton-Smith opened his keynote by describing the reality that very much underpins contemporary military thought: ‘The tech revolution is driving a revolution in how war on land is waged’.

CGS then spoke of the emergence of a ‘powerful combination of quantum computers, data clouds, artificial intelligence, 5G connectivity, robotics and autonomy’, all of which are fundamentally altering established operational paradigms and engendering profound change in Army leadership, culture and organisational process.

Against this backdrop, he acknowledged that the Army needs to become a ‘smarter customer’ to keep pace with these rapidly developing technologies, and this will involve new partnerships that transcend private-public boundaries. The Army Industrial Engagement Framework, if you haven’t read it already, provides more insight into how these partnerships will work in practice.

Like the Royal Navy, the British Army have identified testing and evaluation (T&E) as a critical enabler for rapid innovation. ‘Prototype Warfare’, as outlined by Field Army Commander Lieutenant General Ivan Jones at this year's DSEI, is an ‘opportunity-led approach designed to secure competitive advantage via trial and error and adaptation’. Crucially, General Jones highlights the need to change cultures around risk aversion, and wants to encourage and empower local commanders to ‘take calculated risks with a higher than normal tolerance for failure, enabling them to learn, and adapt’. 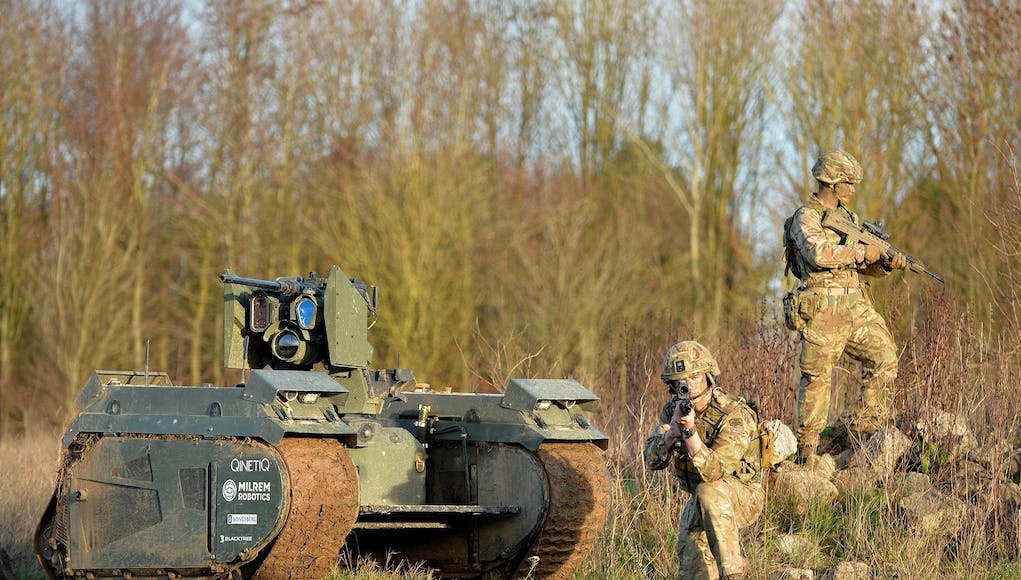 This is significant. Writing for the Wavell Room, the British Army Innovation Team argued back in June that ‘all too often we tie ourselves up with processes and create an environment that is the antithesis of one that encourages innovation, creating frictions and restricting the flow of ideas’. Much is this is due to the seeming paradox of wanting to innovate, wanting to rake risks, but doing so whilst cognisant of the fact that Army leaders must spend tax-payer money responsibly.

Whilst Prototype Warfare has already had some success stories (AUTONOMOUS WARRIER being one), it is perhaps worth stressing that a perception shift around spending and risk-taking must come from the top (policy) and be clearly articulated to civilian society. This might help to alleviate the pressure to ‘succeed’ by ensuring there is greater understanding of the Armed Forces’ new approach to capability development and delivery.

STEM and the Next-Generation Land Force

That said, the Army itself is engaging with the public and educating them about their role and technologies. At their annual Combat Power Demonstration last month, students and cadets were invited to see some of the new capabilities the Army has been integrating into its units, including nano-drones and virtual reality headsets. This, too, reflects its commitment to innovation, by demonstrating to the public and its young recruits the importance of STEM (science, technology, engineering and mathematics) in tomorrow’s battlefield.

Recruitment and retention is a key priority for the UK Armed Forces, and indeed its global partners and allies. Competition for software engineers, cybersecurity professionals, data analysts and innovative thinkers in the Information Age is fierce.

Accepting that it will be challenging, near impossible, to offer the same financial benefits to potential recruits as the commercial sector, other avenues are being explored. In the case of the British Army, as highlighted in the Industrial Engagement Framework, they have prioritized ‘Skills Investment’. This will involve funding thousands of Intermediate/Advanced Apprenticeships to ensure that their employees can develop professionally and, in future, offer their skills to industry.

At DSEI, General Carleton-Smith celebrated the fact that the Army currently has 13,000 soldiers conducting apprenticeships, with an additional ninety undergraduates to be funded via their STEM Graduate Inflow Scheme from 2022. Their ambition is to develop a future force of 'digital natives', as Copinger-Symes described them at DTDT.

Industry, too, have been encouraged to support Army STEM initiatives. CGS emphasised the importance of industry-military secondments and sponsorship, ensuring those cross-overs between the public and private sectors are more seamless, and thus more beneficial for the defence industrial base as a whole.

Investing in the Future Force

Finally, and perhaps most importantly, the British Army have demonstrated their desire to innovate through additional funding and awarding of contracts at speed and scale.

I referenced the AUTONOMOUS WARRIOR exercise that took place in 2018 earlier in this piece. Like the Royal Navy’s own exercise, it helped industry to develop their technologies through the user. This level of collaboration is but one example of innovation and cultural transformation, whereby the requirement or problem statement, the user, and the capability developer align in partnership.

Following this exercise, which focused on unmanned and autonomous systems, £200 million worth of contracts were subsequently awarded to support industry – prime contractors, SMEs and non-traditional defence companies – in their development of such capabilities.

This year, the Field Army Commander also announced the allocation of £15,000 to every commanding officer in the Field Army so that they might be empowered to take risks and invest in technologies for T&E. Again, such an initiative empowers and enables Army leaders to take risk and innovate.

The UK MOD-wide innovation teams are also shaping future Army capability development. Via the £800m Defence Innovation Fund, the Army has so far awarded a £1 million contract to Bohemia Interactive Solutions to develop a Virtual Reality training pilot. The Defence and Security Accelerator (DASA) also awarded £3 million worth of funding to six companies for the development of semi-autonomous concept demonstrators for the British Army, and these will be demonstrated at this year’s Army Warfighting experiment too.

By utilising capability demonstrators and investing in continuous T&E, the Army looks set to live up to the expectation set out in its new Industrial Framework:

An enduring focus on innovation activity, prioritised against the threat and wider global challenges, will ensure the Army maintains military advantage into the future.