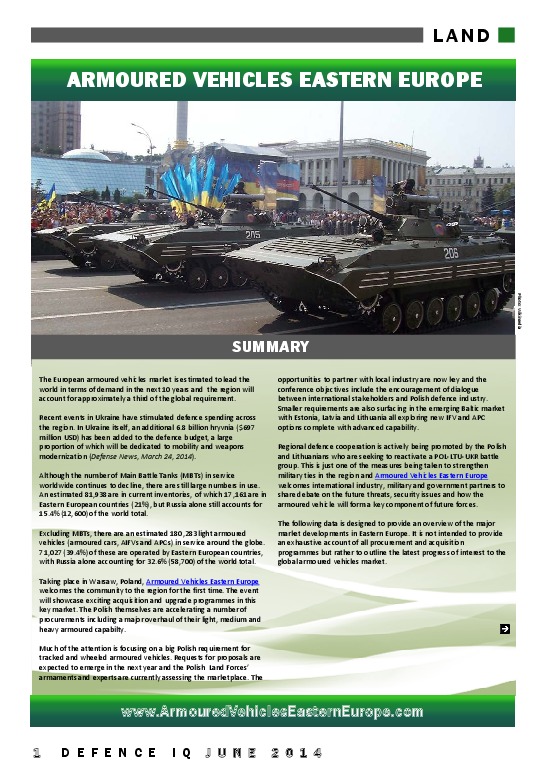 The European armoured vehicles market is estimated to lead the world in terms of demand in the next 10 years and the region will account for approximately a third of the global requirement.

Recent events in Ukraine have stimulated defence spending across the region. In Ukraine itself, an additional 6.8 billion hryvnia ($697 million USD) has been added to the defence budget, a large proportion of which will be dedicated to mobility and weapons modernization (Defense News, March 24, 2014).

Although the number of Main Battle Tanks (MBTs) in service worldwide continues to decline, there are still large numbers in use. An estimated 81,938 are in current inventories, of which 17,161 are in Eastern European countries (21%), but Russia alone still accounts for 15.4% (12,600) of the world total.

Excluding MBTs, there are an estimated 180,283 light armoured vehicles (armoured cars, AIFVs and APCs) in service around the globe. 71,027 (39.4%) of these are operated by Eastern European countries, with Russia alone accounting for 32.6% (58,700) of the world total.

Taking place in Warsaw, Poland, Armoured Vehicles Eastern Europe welcomes the community to the region for the first time. The event will showcase exciting acquisition and upgrade programmes in this key market. The Polish themselves are accelerating a number of procurements including a major overhaul of their light, medium and heavy armoured capability.

Much of the attention is focusing on a big Polish requirement for tracked and wheeled armoured vehicles. Requests for proposals are expected to emerge in the next year and the Polish Land Forces’ armaments and experts are currently assessing the marketplace. The opportunities to partner with local industry are now key and the conference objectives include the encouragement of dialogue between international stakeholders and Polish defence industry.

Smaller requirements are also surfacing in the emerging Baltic market with Estonia, Latvia and Lithuania all exploring new IFV and APC options complete with advanced capability.

Regional defence cooperation is actively being promoted by the Polish and Lithuanians who are seeking to reactivate a POL-LTU-UKR battle group. This is just one of the measures being taken to strengthen military ties in the region and Armoured Vehicles Eastern Europe welcomes international industry, military and government partners to share debate on the future threats, security issues and how the armoured vehicle will form a key component of future forces.

The following data is designed to provide an overview of the major market developments in Eastern Europe. It is not intended to provide an exhaustive account of all procurement and acquisition programmes but rather to outline the latest progress of interest to the global armoured vehicles market.