Aveillant's radar has been installed on a hillside overlooking Monaco. Image: Aveillant

The potential for commercial or hand-build small unmanned aircraft to be used by terrorists to deliver explosive, chemical, biological or radioactive payloads is a growing concern. Such aircraft have already been used in Syria and Iraq by Daesh to drop bombs on opposition forces; the idea that adherents to their cause who presently are planning or carrying out more ‘conventional’ terrorist acts in western countries may adopt unmanned aircraft for future attacks is by no means unimaginable.

As a result, counter-drone systems are a growing market. Before action can be taken, a threat aircraft has to be identified and tracked. Given the small size, high plastic content, and possible lack of a previously seen set of signature characteristics, this is a job that conventional perimeter security products may not be best suited to carry out.

One British company has an answer. Aveillant, a firm spun off from the Cambridge University-affiliated Cambridge Consultants in 2011, has pioneered a new kind of sensor it calls ‘holographic radar’ (see panel) which, the company says, is particularly well suited to the counter-drone mission. Aveillant's Gamekeeper radar, which is capable of detecting small unmanned aircraft, distinguishing them from birds, and tracking them in three dimensions out to a distance of 5km, has been installed in two urban counter-drone systems - one in Monaco and another in Singapore.

SEE ALSO: A timeline of the rising small UAS threat

“The big problem most customers have is finding radar that can actually see these drones, particularly at distance, and then have the ability to discriminate on whether it's looking at birds or drones,” says David Crisp, Aveillant's CEO.

Speaking before the announcement of the Singapore contract – most details of which are not being made public, but the customer is the defence giant ST Kinetics – Crisp was able to give some insights into how the Monaco system operates. The radar is sited on a steep hillside and looks out to sea across the entire city. Tests began in May 2016: almost from the moment the Gamekeeper site was switched on, the results were impressive. Crisp recalls one early demonstration, which involved flying a small UAV to test the radar's ability to see it, discriminate it from other small objects in the air, and track it.

“We were just flying back in from 5km when another drone suddenly appeared at 5km, following our drone," he says "Obviously there must have been some boat moored out to sea there, and someone was wondering what was going on so they sent up their own drone to investigate ours. We had some government security officials watching, and I think that was a pretty conclusive demo, albeit accidental.”

In March, Aveillant announced a formal partnership with DSNA Services, the consultancy army of the French civil aviation authority, to integrate the Gamekeeper system into a wider counter-drone system that will include long-range, high-definition optical and infra-red cameras as well as radio-frequency detectors. A pilot programme to test the integrated system in what a joint press release calls “a complex airport environment” is due to take place later this year.

Holographic Radar: A new technology decades in the making 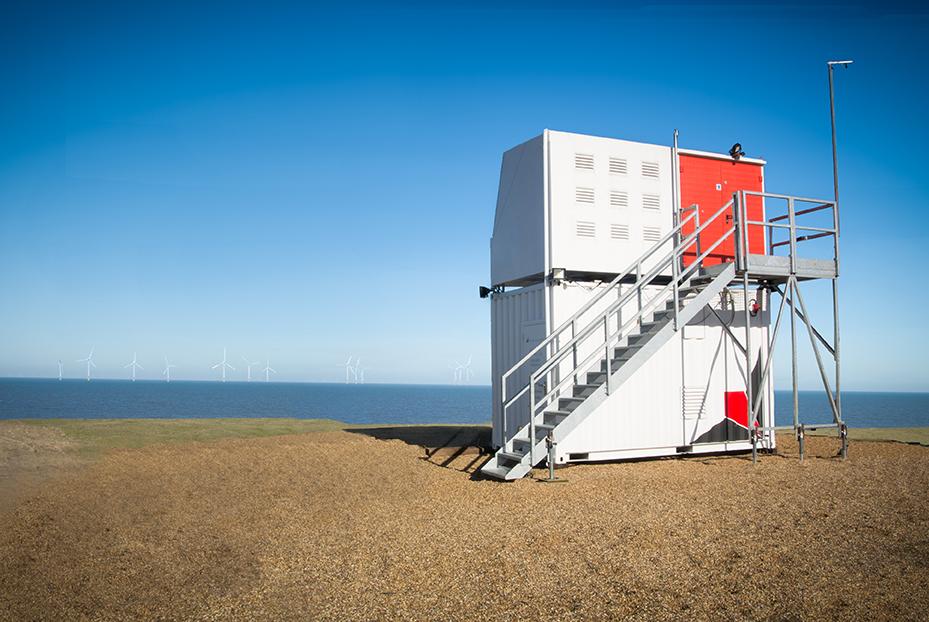 A larger Aveillant array – shown here during testing in Norfolk – can be optimised to see aircraft through clutter generated by wind farms. Image: Aveillant

The idea of a constantly staring radar array, capable of tracking targets in three dimensions, is new: but in some key respects, Aveillant's trademarked Holographic Radar system echoes the original concept of radar.

“Conventional radar is like a lighthouse: it's sweeping a beam around the horizon,” explains Crisp. "What it sees is in 2D, so you don't know if it's at 20 feet, 200 feet, 2,000 feet or 20,000 feet – you just know there's something 20 miles over there. With our Holographic Radar, we don't have a beam: we light up the entire sky in all directions, and we have a separate staring array – an eye, if you like - that's watching everything in all directions, at all heights, all the time.”

Two key technological advances are leveraged to create the Aveillant system. The first is active electronically scanned array radar, which permits the constant stare; the second is the reduced size and increased performance of computing systems that process the data the sensors collect.

“The computers in one of these radars operate at 10,000 times the speed of a Cray 1 and consume a few hundred Watts," says Gordon Oswald, Aveillant's chief scientific officer. "If we had tried to do this with [previous generations of computer], you would use far too much of the available power to allow the radar to run.”

“The way we operate is actually how radar started out, back in the days of Chain Home,” Crisp says, “but they didn't have the computing power necessary to do it. Each Chain Home sensor would give you a bearing towards the target, and they'd telephone each other, pass on that information, plot it on paper, and then you could locate the target. In the last decade, the availability of low-cost, high-power computing enabled what we're doing.”

You may also be interested in: Are we prepared for the threat of privately owned UAVs?