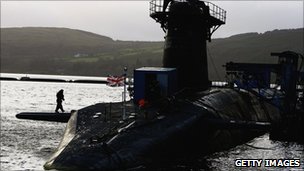 The renewal of Trident has major financial and political implications.
The government is considering delaying the replacement of the Trident nuclear weapons system, the BBC has learned.
Ministers will decide shortly what kind of deterrent Britain should have and can afford alongside the current comprehensive spending review.
But they are now looking at postponing key spending decisions on Trident until after the 2015 election, potentially saving billions in the short term.
The Ministry of Defence said that no decisions had been taken.
Delaying any decision beyond 2015 would also mean avoiding a political row in the run-up to the next general election, BBC deputy political editor James Landale says.
While the Conservatives strongly support Trident renewal, the Liberal Democrats do not - their coalition agreement allows Lib Dem MPs to argue against the plan to renew Trident.
Design plans
Britain's nuclear weapons system is made up of four submarines, based at the Faslane naval base on the Clyde, which can deploy Trident ballistic missiles carrying nuclear warheads.
At least one submarine is always at sea so a continuous deterrent can be maintained.
The government is already spending lots of money on potential plans and possible designs for new submarines that would deliver the Trident missiles.
The main, final decision to go ahead and build the new submarines was expected to be taken in 2014. This is known in military jargon as the "main gate" decision, the point of no return when ministers sign contracts and start spending billions of pounds.
However, ministers are now looking at pushing this "main gate" decision into the next parliament, in 2015 or beyond.
Budgetary pressures
Any delay would ease the short-term pressure on the defence budget which is facing substantial cuts under the spending review.
Critics say delaying spending money on replacing Trident will cost the taxpayer more in the long run as it will risk losing the skills of engineers who might lose their jobs if there is no work for them, and will increase the costs of repairing existing Vanguard submarines which will have to last for longer.
Treasury Minister Justine Greening told BBC2's Newsnight that she could not prejudge the outcome of next month's spending review but there would inevitably be difficult decisions.
Conservative MP Bernard Jenkin, a former defence spokesman, warned on BBC Radio 4's Today that it would be "extremely divisive" if the coalition agreement on Trident were abandoned.
He said he did not think that the delay would happen because it would "disturb the Conservative Party very, very much" and would be the "maddest" decision to take, increasing the long term costs of replacing Trident and undermine the UK's foreign policy.
Seaborne presence
But former Liberal Democrat leader Sir Menzies Campbell told the same programme it made "no sense" to be committed to a like-for-like replacement of a nuclear weapons system designed for the cold war era.
He said decisions made in the next few weeks for the strategic defence review could not be reversed, so it made sense to look at other alternatives for a future British nuclear weapons system.
In a report published on Wednesday, MPs urged ministers to clarify how a replacement for Trident - which it is estimated could cost up to £20bn - will be funded.
The Treasury has made clear that the Ministry of Defence will have to cover the cost from its own budget, which is facing reported cuts of between 10% to 20% over the next four years. Responding to the report, Lib Dem Defence Minister Nick Harvey said there were "big debates" to be had about the cost of renewing Trident - currently the subject of a value for money exercise.
But he insisted that this would not impact on the current spending round - the details of which will be announced next month - as the bulk of expenditure will be after 2015.