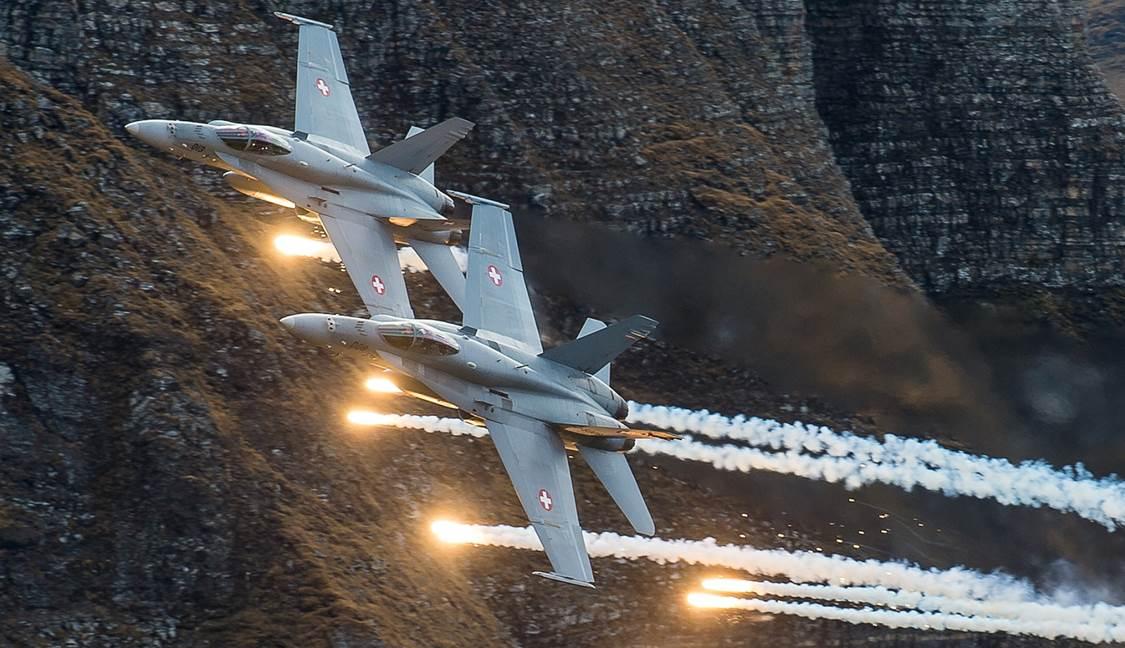 Swiss F/A-18 jets are to be upgraded while the MoD seeks to enact a new generation fighter programme. Image: G. Mader

On 6 September, Swiss Defence Minister Guy Parmelin presented the Bundesrat (the Swiss Governmental Ministerial Council) with a proposal for the complete replacement of the Swiss Air Force's (SwAF's) 26 F-5E/Fs and 31 F/A-18C/Ds.

The plan foresees the replacement of both aircraft types to begin in 2023, in addition to the SwAF's current 35mm Oerlikon anti-aircraft artillery and Rapier surface-to-air missiles (SAMs) with a new ground based air defence system (known as Bodengestützte Luftverteidigung or BODLUV).

While a SwAF evaluation commission for the new combat aircraft – currently dubbed the NKF (Neues Kampfflugzeug) – have met with external experts 14 times since April 2016, several approaches to the acquisition remain under deliberation.

An internal 200-page report seen by Defence IQ seems to support an option of 30 new combat aircraft plus the GBAD system. However, Parmelin has pushed instead for a “more realistic” solution, aimed at appeasing both military and political parties. The most expensive option meanwhile cited 55-70 fighters and long-range SAMs for around $15-18bn.

The Bundesrat reportedly agreed on the general lines of Parmelin’s option but a majority did not initially agree with the longer-term financial implications. Ministers asked Parmelin for more detailed calculations of the budget impact, given that spending will require an additional $1bn per year from 2023 to 2032 and will no doubt impact the procurement plan already approved for the rest of the Swiss Armed Forces.

A government spokesman said the Bundesrat would probably decide later this year on the launch date for a Request for Proposals (RFP) providing it receives a satisfactory answer to its questions.

According to the MoD, the RFP will be sent to Saab for the Gripen-E/F; Airbus for Typhoon (probably with the Tranche 3 with active electronically scanned array radar); Dassault for Rafale (probably the F4 version); Boeing for the F-18E/F (probably the Super Hornet Advanced) and Lockheed Martin for the F-35.

The new motion is not said to be disturbing plans to extend the service-life of the existing F/A-18s. In spring of 2017, Switzerland’s ‘Army Report 2017’ was accepted by majority, including a $509m agreement to upgrade and modernise the Hornet fleet. The aircraft will receive structural upgrades, replacement of obsolete avionics and a new BVR missile. Ministers however rejected (97 against 85) the proposed plan to add an air-to-ground capability. That capability has reportedly been added to the new jet procurement plan.

The MoD is requesting almost three times the $3.2bn it would have cost to procure 22 JAS-39E Gripens to replace the obsolete F-5 Tiger, which fell through in May 2014.

Swiss sources told Defence IQ that the government initially considered conducting the procurement with funds “buried” in the defence budget in order to avoid a referendum. That idea has clearly been shelved by Parmelin who perhaps now sees a greater likelihood of citizens voting in favour of new fighters as part of an overall modernisation plan, long before a decision is made on what aircraft is to be selected.

The 2014 referendum was held after negotiations with Saab, leading to left-wing, anti-arms voters uniting with supporters of the Swiss military who rejected the Gripen-E for what was perceived as insufficient in capability or too expensive. A speedy referendum is now being planned for 2019.

The latest public polls conducted by Swiss media have shown a tendency to support a new fighter but a rejection of the F-35 as too expensive.

Involved in the fighter aircraft market? Sign up for a free membership to Defence IQ today for more analysis, reports, insight and commercial opportunities in the defence industry.