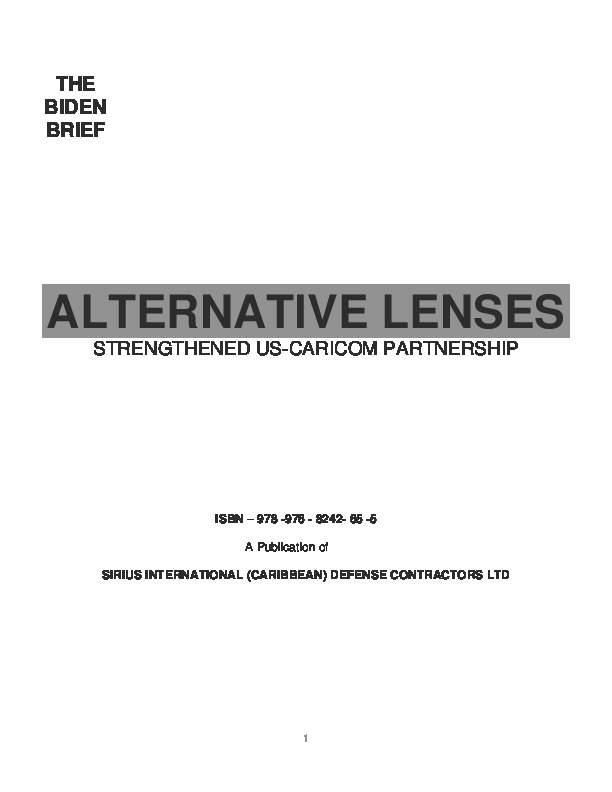 This whitepaper by Sirius International (Caribbean) Defense Contractors is presented as a rejoinder to a recent article: Cuba and Venezuela: Assessing United States Sanctions in the Hemisphere, by Ambassador Curtis A. Ward.

As a useful guide to the content in this whitepaper, the following areas can be directly correlated to the points raised by Ambassador Ward in his article:

US power remains the linchpin of the international system as America’s global preponderance endures in five decisive domains – politically, militarily, economically, technologically and culturally. Notwithstanding this, the ability of the US to maintain near current levels of defense spending is in jeopardy and the trend for national defense spending has been a downward one for several decades; the country’s share in the global GDP held steadily until 2005, and is currently 24 percent, which makes it the jurisdiction with the single largest share. Despite these fluctuations, the global economic pivot is shifting to Asia even as the international system is increasingly adjusting to the realities of multi-polarity and new emerging power centers.

Global Trends 2030: Alternative Worlds Game Changers issued by the Office of the Director of National Intelligence, hints that even as the economic weight of the US is overtaken by China, perhaps as early as the 2020s, the US is likely to remain the "first among equals" alongside other great powers because of this affirmed preeminence across a range of power dimensions.

Additionally, although there is currently no competing alternative to the Western liberal order, there is a prevailing disposition among contenders for preeminence, such as China and Russia and geopolitical pivots of the like of Iran and their satellites, for a diminution of US assertion. The dynamic is compounded by the fact that within the Americas populist sentiment is gaining traction with the usurpation of national decision-making capacities to overarching political structures, epitomized in the Organization of American States and its various organs. Illustrative of the spill-over of divergent stances, on the occasion of the VI Summit of the Americas hosted by the government of Colombia, CARICOM Member States in concert with Latin American allies, were firm in an independent position from that of the United States on the issue of Cuba’s debarment from the Organization of American States, and on contentious aspects of the hemispheric drug policy. This is a mere symptom of changing power dynamics in the region.

"The drive towards unity, independence and self-determination of Latin America and the Caribbean that has gathered force over the past 10-25 years is now unstoppable. The results of the V and VI Summits of the Americas of 2009 and 2012 confirmed the emergence of "Our America" from under Washington’s shadow. Governments, irrespective of their ideological complexion, were firm in taking an independent position from that of the United States, on Cuba and the drugs problem. This has had a notable impact on the development of relations between archipelago and mainland and between speakers of English, Spanish and Portuguese." [Pan Caribbean Perspective - June 28, 2012]

CARICOM countries are currently represented in an array of regional intergovernmental unions exemplified in the Association of Caribbean States, the Bolivarian Alliance for the Peoples of Our America, the Union of South American Nations and the recently constituted Community of Latin American and Caribbean States, the lattermost resolutely excluding US and Canadian membership. These geopolitical groupings have "opened new spaces" politically, economically and culturally.

Simultaneously, China’s widening orbit into the Caribbean is illustrative of its long-term strategic progression into the wider hemisphere that has all but trumped long-held ideological affinities. The PRC continues to make impressive inroads into the areas of diplomacy, military exchanges, trade, finance and commerce, culture, and critical infrastructure. A recently held symposium (April 30-May, 01), titled "China’s Strategic Engagement in the Americas: Implications for US and Partner Nations Interests" hosted by the Institute for National Strategic Studies in collaboration with the Defense Intelligence Agency provided the opportunity for diplomats, leading sinologists and security professionals to ruminate and make predictions on the implications of the PRC’s overwhelming engagements in the region, and its medium and far-term intentions.

Against this setting, the Obama administration has been seeking to redefine America’s hemispheric leadership by advocating a "new era of engagement" (which effectually became the clarion call for the V Summit of the Americas hosted in 2009 by Trinidad and Tobago), and is actively promoting a trove of soft power initiatives. Much focus has been placed on development assistance, whilst simultaneously projecting soft power and smartly applied hard power in programs that are typically incentives-based. This maneuvering was by no means unforeseeable.

Tech Transition: Challenges and Opportunities for Veterans in Enterprise
2020-01-17
By Marcus Kenny
< >