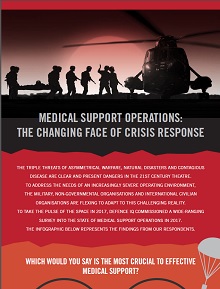 Deployed Medical and Healthcare Delivery 2020 will take place next April 28 - 30 in London, UK. Last year's edition welcomed the Defence Medical Services, UK MoD and was attended by Surgeons General and senior representatives from both the military and solution providers. This year is set to be the biggest edition so far with our most senior speaking panel yet.

Fill in form to view the agenda >>