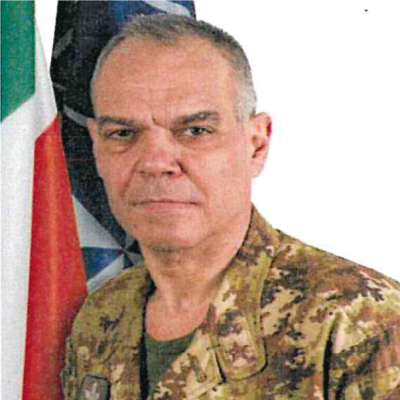 Major General Maurizio RICCO graduated from the Military Academy and the Service Branch School where he was commissioned 1st Lieutenant of airborne artillery.  His military schooling also includes the Italian Army Staff College, the Senior Course at the NATO Defence College in Rome, the “Institut des hautes étude de défense nationale” and the “Centre des études militaires” in Paris.

He has got considerable international experience which comprises periods spent as the Italian LNO at UNOSOM II HQs in Mogadishu (Somalia), Military Observer at UNIKOM in Iraq and Kuwait, Operations/Intelligence Staff Officer at the Italian Military Representative to NATO Military Committee in Brussels, Military Assistant to ACOS Support at SFOR HQs in Sarajevo (Bi-H), Commander of the Italian Battle Group in ISAF IV in Kabul (Afghanistan), SO1 FCOORD OPS (during the same tenure he was SO1 COORD to COS while NRDC-ITA was leading ISAF VIII), then ACOS G5 Plans and Policy and later on DCOS OPS at HQs NATO Rapid Deployable Corps-Italy (HQ NRDC-ITA), Chief J5 and later on the Commander of the Joint Task Force Sector West based on the “Granatieri di Sardegna” Brigade to the United Nations Interim Mission in Lebanon (UNIFIL), Chief of Staff to the European Naval Force Mediterranean (EUNAVFOR MED) HQs in Rome, Deputy Chief of Staff for Operations and from February 2017 to November 2018 Chief of Staff to the HQs NRDC-ITA.

He has also covered some assignments within the Italian Army General Staff and Italian Army Training and Doctrine Directorate in Rome.

Check out the incredible speaker line-up to see who will be joining Maurizio.