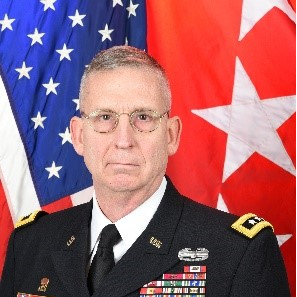 The Martin family’s military heritage harkens back more than ten generations to 1776 when Private Daniel Martin enlisted in the 1st New Jersey Infantry Regiment to fight in the American War for Independence, including service at Valley Forge. Lieutenant General Martin graduated from the United States Military Academy in 1983 and was commissioned a second lieutenant of Armor. His military education includes the Armor Officer Basic Course (Cavalry Track), the Infantry Officer Advanced Course, the Naval College of Command and Staff, and the Army War College. He holds a Master’s Degree in National Security & Strategic Studies from the Naval War College, a Master’s Degree in Strategic Studies from the Army War College, and a Master’s Degree in Business from Webster University.

TRADOC recruits, trains and educates the Army, driving constant improvement and change to ensure the Total Army can deter, fight and win on any battlefield now and in the future.

Check out the incredible speaker line-up to see who will be joining General Paul.