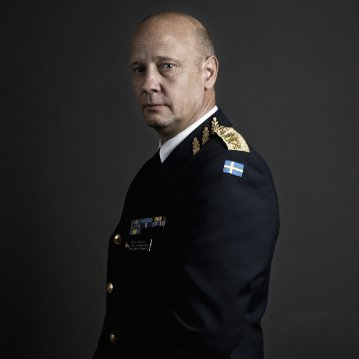 Major General Karl L E Engelbrektson was born 1962. He is married to Sofi and they have two sons. Since 2016 he is the Commander of the Swedish Army. Prior to that he was Director Training / Education and Force Development, Swedish Armed Forces. Karl L E Engelbrektson started his military career in 1981 at the Bohuslän Regiment (17th Inf Regiment) as a conscript rifleman. He graduated from the Infantry Officers Course 1984. He has commanded on all levels from platoon to brigade and as military district commander. He graduated from the Swedish National Defence College in 1996. Since, he has served in all major branches of the Joint HQ, including; Military Intelligence, Personnel, Force Generation, Strategic Planning and Operations.

Karl has an extensive experience of working in and with multilateral institutions on both the pol-mil level and as a commander, primarily in the EU and NATO but also with the UN, AU and OSCE.

During 1996-97 he served at the MoD organising the first desk for EU military affairs. During this time he was also responsible for arms control issues related to the OSCE. During the Swedish presidency of the Council of the European Union in 2001 he held an expert position at the EU desk in the SE Joint HQ.

In 2003/04 he was Commanding Officer of the Swedish Bn in Kosovo. During this command he experienced the Crisis in Kosovo during the mid-march events in Caglavica 2004, operating closely with units from CZ, FI, IE, NO, SK, UK and US.

In 2005 he was assigned to set up the Swedish, Finnish, Norwegian, Irish and Estonian EU- battlegroup with the designated OHQ in the UK. In 2006 (to sept 2008) he was the Force Commander of the Nordic Battlegroup (NBG-08). In parallel he also served as Deputy Commander in the German EU FHQ in Ulm. Capitalising on the multilateral polmil experience from the EU battle groups he served as a senior mentor to the East African Standby Force (EASF).

2010-13 he was the Swedish Military Representative (Milrep) to the EU and NATO. Times including for instance the European Council on Defence 2013, contributions to the EU OP Atalanta, EU Training Missions and on the NATO side the Swedish participation in ISAF and the Operation Unified Protector in Libya. During the time as Milrep, Engelbrektson was frequently engaged in the international community in Brussels, showing a particular interest in the relationships with NATO, UN and the EDA.

Check out the incredible speaker line-up to see who will be joining Karl.