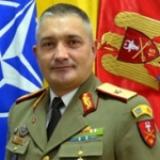 Chief of Training and Doctrine Directorate Romanian Ministry of Defence

Major-General Iacob was born and raised in Paşcani city, Iaşi County and joined the Romanian Armed Forces in 1993 by graduating the Armour Officer School. He holds a Bachelor’s degree in Science awarded by the Romanian National Defence University and a Master’s degree in Strategy and International Security awarded by King’s College, University of London in 2013

His formal education includes an US Army Armour Officer Basic Course in 1997, Public Affairs Officer Course in 2001 and UK Royal College of Defence Studies in 2012.  BG Iacob graduated the English Language Course of the US Defence Language Institute in 2001.

Major-General Iacob assumed responsibilities as the Chief of the Training and Doctrine Directorate, Romanian Defence Staff in February 2018 and was promoted to his current rank in December 2019

Check out the incredible speaker line-up to see who will be joining Brigadier General Iacob .