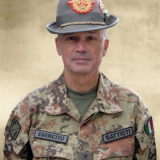 Giorgio Battisti is a retired Lieutenant General in the Italian Army. His last assignment was Commander Italian Army Training and Doctrine Command in Rome. He retired on October, 11th 2016, after 44 years of military service. A native of Mantua, Italy, Lt.Gen. Battisti graduated and received his commission as mountain artillery officer at the Italian Military Academy in 1974. Since then he had multiple command and staff positions in Italy and abroad. General Battisti served in command and leadership positions from platoon through Corps and Army Command, including the 29th battery of the “Asiago” group, the 40th battery of the “Pinerolo” Group, the “Conegliano” Artillery Group, the Cadets’ Regiment at the Military Academy, the “Taurinense” Alpini Brigade and the NATO Rapid Deployable Corps – Italy. His operational deployments include the UN mission to Somalia in 1993 and Bosnia in 1997. In 2001, he was appointed as the first Commander of the Italian Contingent during the ISAF mission in Kabul. Lt.Gen. Battisti returned to Afghanistan three more times: in 2003, as Commander of the Italian mission “Nibbio”, within the framework of Operation Enduring Freedom and the ISAF Mission; in 2007, as Deputy Chief of Staff Support at ISAF HQs; and in 2013-14 as ISAF HQs Chief of Staff. During his career he has held several Staff appointments, ranging from Head of the Italian Army OPS Room to Chief Current Ops to Head of the General Affairs Department at the Army General Staff, and from Chief of Staff at the Italian Operational Land Forces HQ in Verona to the Italian Army Official Spokesperson in Rome. Gen. Battisti’s education includes a degree as well as a 2nd level Master’s degree in Strategic Studies from the University of Turin, the Command and Staff Course and Command and Staff Course General Course (War College). He speaks French and English and is the author of various articles and books, including “Black feathers in Afghanistan” (2004) and “The Military History of Afghanistan” (2014). He is member of the International Institute of Humanitarian Law, the NATO Defense College Foundation and the Institute for Global Security and Defense Affairs. Gen. Battisti and his wife Simonetta have been married for more than 30 years and have three sons and a daughter. Amongst his many distinctions he has twice received the Military Order of Italy for his outstanding service in Afghanistan (Knight’s Cross for the ISAF Mission and Officer’s Cross for the Operation Enduring Freedom). He was awarded the UN Medal and the Italian Cross for the Operation UNOSOM in Somalia and the US Bronze Star Medal for the Operation Enduring Freedom. He was awarded Commander of the Order of Merit of the Italian Republic and Officier de l’Ordre National du Mérite of the French Republic. Lt.Gen. Battisti has also received the French and Polish Commemorative Medal and the Spanish Distintivo de Mérito por Operaciones de Mantenimiento de Paz for his ISAF deployments. In 2014, he was awarded the US Legion of Merit for his exceptional service at ISAF HQs. Gen. Battisti is a non-competitive runner and an enthusiastic supporter of Inter Milan football club.

Check out the incredible speaker line-up to see who will be joining Giorgio .

9:00 AM PANEL DISCUSSION: Equipment maintenance and upgrades for future requirements in protected mobility

9:30 AM Developing and integrating ISR assets for enhanced indirect and joint fires