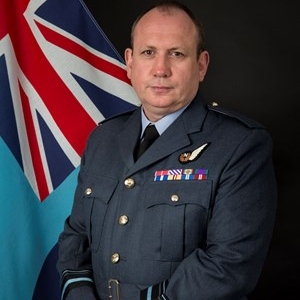 After a successful 2 ½ years, which included Operation GRANBY, Rocky was in the first tranche of first tourists to be selected to the Tornado Qualified Weapons Instructor (QWI) Course. On completion he returned to IX(B) Sqn for another 18 months prior to posting to 617 Squadron at Royal Air Force Lossiemouth. He was then posted to XV Sqn for 2 years where he became the lead Instructor of the QWI Course and left on promotion in 1998 to take up a Flight Commander role on 14 Squadron at Royal Air Force Bruggen. This tour included many months on operations in the desert and included further active duty, during the Kosovo Campaign, flying long duration sorties through Europe from the home operating base. He was awarded the Distinguished Flying Cross during this operation.

On completion of his tour in August 2000, Rocky was posted into the Ministry of Defence, Whitehall, for the first time, to work on a number of weapon acquisition programmes including the RAF’s new cruise missile Storm Shadow. On completion of this tour in 2002, he was promoted to Wing Commander and attended the Advanced Staff Course at the Joint Services Command and Staff College, Shrivenham, where he sat for an MA in Defence Studies. He returned to the Ministry in 2003 where he joined the Directorate for Air Resources and Plans, working for the Finance Director, in the role of Staff Officer for all Ground Attack issues.

In August 2005, Rocky returned to Royal Air Force Lossiemouth to take command of 617 Squadron (The Dambusters). He completed two operational tours of duty in the Gulf during his command tour, including the General Petraeus’ surge period in the summer of 2007. As a result, he was awarded the OBE in January 2008.

At the end of his command tour he was promoted to Group Captain and returned (for the 3rd time) to the MOD in the post of Assistant Head of Equipment Capability.

He assumed command of Royal Air Force Marham in December 2009 having amassed more than 5 years on operations and three challenging tours in the Ministry. He thoroughly enjoyed the demands of a challenging command tour at Marham which included the Tornado Force simultaneously delivering on operations in Afghanistan and Libya. Additionally, this included ensuring the delivery of 3000 mile roundtrip operations from RAF Marham to Libya and back for an 8 month period.

On completion of his command at Marham, Rocky attended the Higher Command and Staff Course at Shrivenham before returning to Head Office for the 4th time in June 2013, in the rank of Air Commodore, as the new Head of Centre Managed Programmes, initially in charge of both the Complex Weapons programme and as Head of the Carrier Enabled Power Projection.

In Mar 2015, upon completion of this tour he relished the challenge of using his operational credentials and capability planning experience in the appointment of ACOS for Capability Development in Headquarters Air Command.

Check out the incredible speaker line-up to see who will be joining Air Vice Marshal Simon.