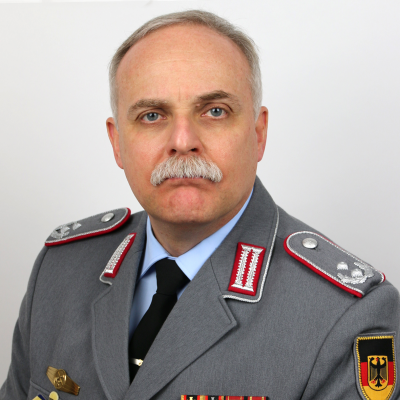 LtCol (GS) Dirks was born on December 12th, 1962, in Berlin, enrolled in the German Army in 1981, and attended Armour Officer Training from 1981 – 1986. That included the achievement of a Degree in Mechanical Engineering at the Bundeswehr University in Hamburg.

From 1998 till 2000 he attended the Operations Analysis Curriculum at the U.S. Naval Postgraduate School in Monterey, California, and achieved the Master of Science in Operations Research.

Thereafter he served as project officer for simulation & training systems of the Armoured Corps, followed by the assignment as deputy battalion commander of 393 Tank Battalion. Afterwards he served as armament field officer at the Maintenance Force Development Group and at the Armed Forces Transformation Center. Subsequently he served as G-3 of the Material Requirements Section at the Army Office. From 2008 till 2012 he was appointed to German Federal MoD as ministerial official for Research & Technology.

LtCol (GS) Dirks returned to the Army Office in 2012 and was tasked with the restructuring of the armament section of the Armoured Corps during the transfer of the Army Office to the Army Concepts and Capabilities Development Center. He held his last appointment as section chief material development of the Armoured Corps from 2013 till 2019. The main focus of his responsibility were MBT and IAFV. In 2013 he additionally became member of the German Federal MoD expert group for the future Main Ground Combat System. Furthermore, in 2014 he was appointed chairman of the LEOBEN Combat Development Working Group.

Since March 2019 LtCol (GS) Dirks serves in the Land Systems Roadmap Group of Division II of the Directorate-General Planning in FMoD as desk officer for the Main Ground Combat System.

9:00 DISCUSSION: HUMAN-MACHINE TEAMING AND CHANGING THE WAY WE FIGHT

·          Broadly, how do you see unmanned platforms and RAS transforming the battlefield- in the next 5, 10 & 20 years?
·          What do you see as the biggest roadblock / main challenges for fielding different types of UGVs in the near-term?
·          How can industry support efforts to accelerate deliver of unmanned and autonomous technologies?
·          The ethical question and communicating the realities of robotic combat vehicles

Check out the incredible speaker line-up to see who will be joining Armin.