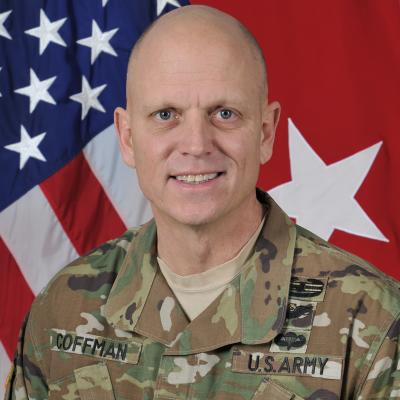 BG Ross Coffman is married to Jacqui Coffman, and together they have three daughters: Lindsey, Lauren, and Katelyn.

Upon graduating from Centre College and completing the University of Kentucky’s ROTC program, he was commissioned in to the Armor Corps.

Most recently, BG Coffman served as the Deputy Commanding General for Maneuver in the 1st Infantry Division with duty in Eastern Europe.

His civilian education includes a Bachelor degree from Centre College, an MBA from Embry Riddle University, and a Graduate Fellowship at Harvard’s Kennedy School of Government

17:35 LEADING THE ARMY’S EFFORT TO MODERNISE THE ARMY’S NEXT GENERATION OF COMBAT VEHICLES