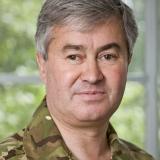 General Richard Barrons was commissioned into the Royal Regiment of Artillery in 1977. He was appointed MBE in 1993, OBE in 1999, CBE in 2003, awarded QCVS in 2004 and 2006, and appointed as an Officer of the US Legion of Merit in 2009. He is an ADC to Her Majesty The Queen and was appointed KCB in 2013. He is the Colonel Commandant and President of the Honourable Artillery Company and is Honorary Colonel of 3rd Regiment Royal Horse Artillery.

He has completed a range of regimental duties in UK, Germany and worldwide on training. On operations he has served extensively in Northern Ireland, Bosnia, Kosovo, Iraq and Afghanistan in UN, UK and NATO appointments. He has commanded units at Battery (B Battery, 1st Regiment Royal Horse Artillery), Regiment (3rd Regiment Royal Horse Artillery, 1999, including Kosovo and Bosnia) and Brigade (39 Infantry Brigade, in Northern Ireland). As Major General he was Deputy Commanding General of Multinational Corps Iraq (Baghdad, 2008) leading on operations with the Iraqi Armed Forces. He was appointed Chief of Staff of the Allied Rapid Reaction Corps in April 2009 and, shortly afterwards, moved again to be Director Force Reintegration in HQ ISAF assisting the Afghan Governments efforts on Taliban reintegration and political reconciliation.

He was Assistant Chief of the General Staff (2010) covering the Strategic Defence and Security Review and Defence Reform exercises before promoting to Lieutenant General (2011) and taking post as Deputy Chief of the Defence Staff (Military Strategy & Operations), the director of operations for UK armed forces. He assumed command of Joint Forces Command on promotion to General, 19 April 2013 and retired from that position in 2016.

Check out the incredible speaker line-up to see who will be joining General Sir Richard.