The world leading Disruptive Technology for Defence Transformation Conference will return to London 24-26 September, bringing together 200-250 senior military leaders, government officials, tech and defence industry, research, War and Staff colleges and academia. The sample delegate list provides the accounts and job titles of those who are already confirmed to attend.
Download your copy on the right >>
For more information, please do not hesitate to contact the team directly on: partner@iqpc.co.uk or +44 (0) 20 7368 9300. 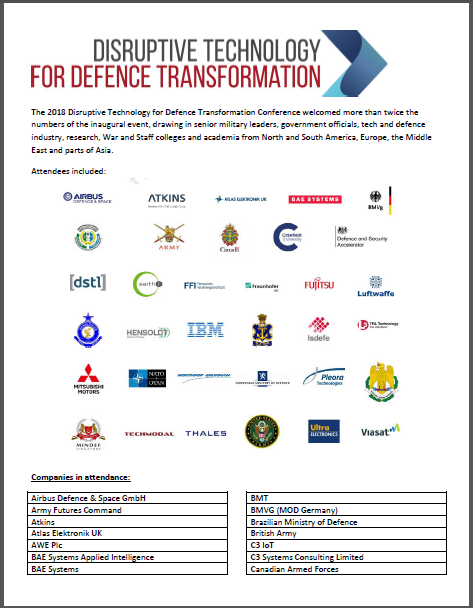 The 2018 Disruptive Technology for Defence Transformation Conference welcomed more than twice the numbers of the inaugural event, drawing in senior military leaders, government officials, tech and defence industry, research, War and Staff colleges and academia from North and South America, Europe, the Middle East and parts of Asia.

This breadth of attendance, and the personal interventions of the UK Vice Chief of Defence Staff, Commander Joint Forces Command and many very senior national military and NATO leaders, underlines the developing pace and significance of how Digital Age technology and method are fundamentally reshaping Defence and Security capability and operations. 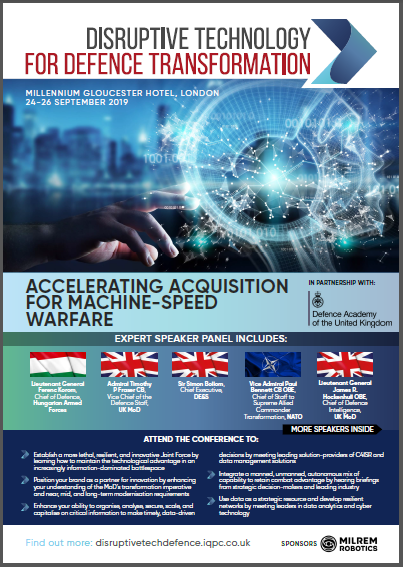 Download for a detailed look at the topics, sessions and speakers joining the 2019 Disruptive Technology for Defence Transformation conference.

Fill in the form on the right for your copy >>

What our attendees think...

The senior panel speakers included personal interventions of the UK Vice Chief of Defence Staff and Commander Joint Forces Command and saw attendees come from across the globe from organisations such as Airbus Defence and Space, BAE Systems, Fujitsu, Thales, Viasat, IBM, DSTL, NATO and many more.

The Defence IQ team created this report containing the highlights of last year’s conference written by the Chairman himself, General Sir Richard Barrons, Former Commander Joint Forces Command (2013-2016), who will return this year to Chair this event once more.

Download this report to learn more about topics covered, such as: 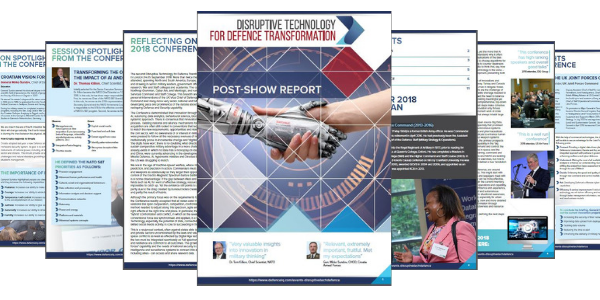