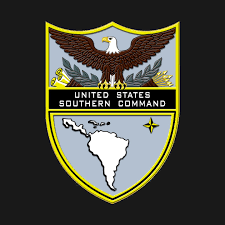 SOUTHCOM is responsible for providing contingency planning, operations, and security cooperation in its assigned Area of Responsibility which includes:• Central America • South America • The Caribbean (except U.S. commonwealths, territories, and possessions) The command is also responsible for the force protection of U.S. military resources at these locations. SOUTHCOM is also responsible for ensuring the defense of the Panama Canal. Under the leadership of a four-star commander, SOUTHCOM’s staff is organized into directorates, component commands and Security Cooperation Organizations that represent SOUTHCOM in the region. SOUTHCOM is a joint command comprised of more than 1,200 military and civilian personnel representing the Army, Navy, Air Force, Marine Corps, Coast Guard, and several other federal agencies. The services provide SOUTHCOM with component commands which, along with our Joint Special Operations component, two Joint Task Forces, one Joint Interagency Task Force, and Security Cooperation Organizations, perform SOUTHCOM missions and security cooperation activities. SOUTHCOM exercises its Combatant Command authority